Our online store is now shut for the summer. We’re back in Sept - see you soon! 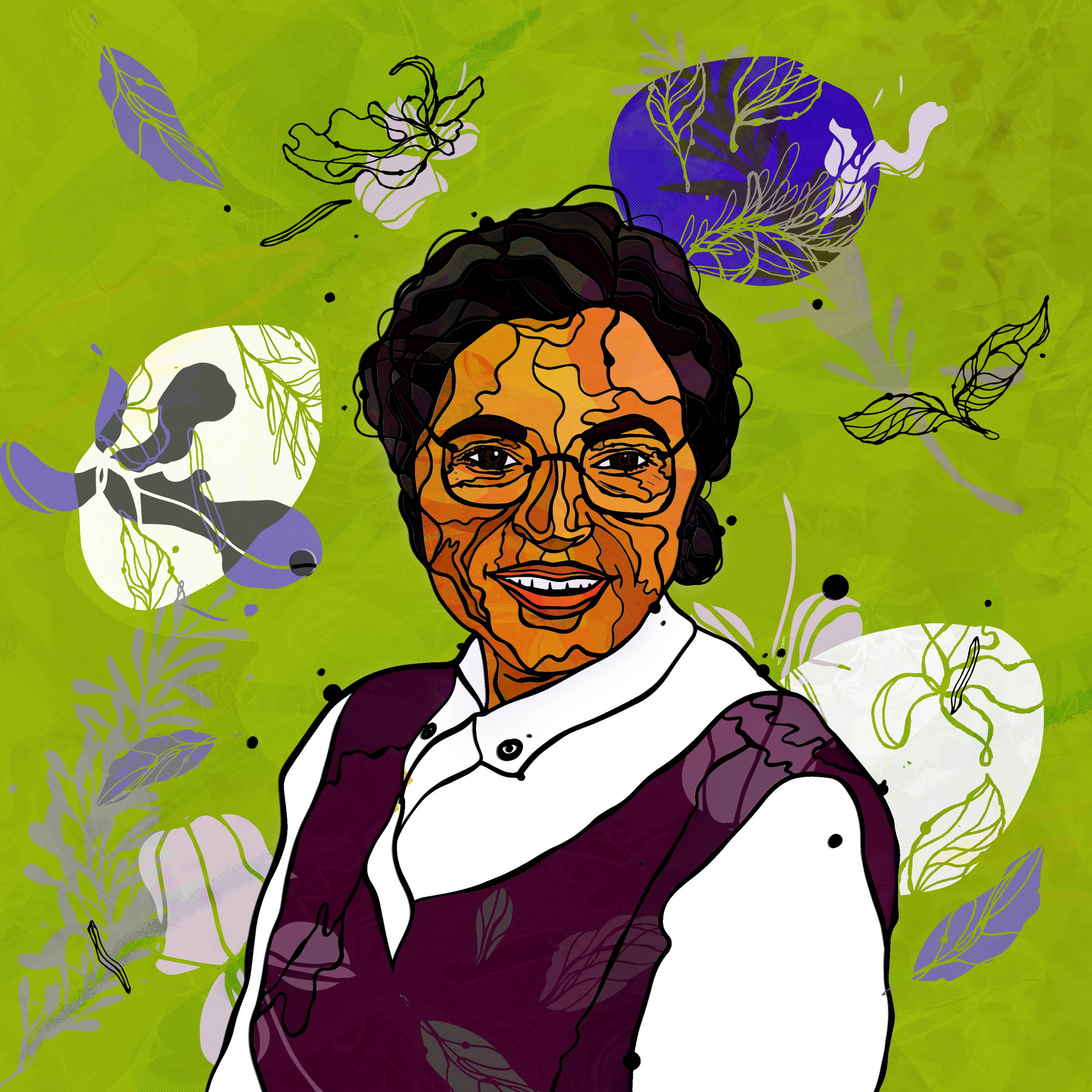 “Stand for something or you will fall for anything. Today’s mighty oak is yesterday’s nut that held its ground.” Rosa Parks

Most people are familiar with Rosa Parks and her famous act of rebellion on a Montgomery bus in 1955. It was a one-woman protest that became the catalyst for the civil rights movement, sparked the Montgomery Bus Boycott and ultimately led to Alabama’s racial segregation laws being declared unconstitutional.

Of course, it goes without saying that Rosa’s bravery on the bus that day was a masterclass in refusing to accept prejudice and standing up for what you believe in. But while she is often painted as a quiet seamstress who impulsively took a stand after a hard day at work, Rosa was actually a lifelong activist who had been challenging racial inequality and the segregated world she grew up in for many years before her refusal to give up her seat on that bus.

Rosa’s bus protest may have been one of quiet determination, but it shouted from the rooftops that this was a woman who would take no more. She had been confronting white supremacy and fighting for change her whole life, and though she suffered personal poverty, threats of violence and illness as a direct result of her activism, she was undeterred. Rosa campaigned for racial and social justice for decades, and we think her life story is the very definition of the word ‘inspirational’.

- Rosa Parks was born in Tuskegee, Alabama, in 1913. Her parents separated when she was young and she moved with her brother and mother to Montgomery soon after.
- The society Rosa grew up in was dictated by Jim Crow segregation laws, which included the separation of white people from black people in public places and on transport. There was also a lack of funding for the education of black children.
- Rosa experienced Klan violence when she was just six years old, when white mobs
attacked black soldiers returning from World War I, along with other black citizens.
- Though Rosa attended a segregated school, there was no local school for black children toattend after sixth grade, so from 1924 she attended an industrial school for girls.
- In 1929, Rosa had to leave school to care for her dying grandmother and chronically ill mother.
- During her late teens, while working as a housekeeper for a white family, a neighbour
attempted to sexually assault her. Rosa fought him off and later wrote about her experience, saying ‘he would have to kill me first’.

ACTIVISM AND THE NAACP

- In 1931, Rosa met Raymond Parks, who became her husband a year later. Rosa described Raymond as “the first real activist I ever met”. Shortly after their marriage, she began helping him defend the Scottsboro Boys: nine young black men who were falsely accused of rape.
- Rosa returned to school and became one of a very few black people in Alabama to achieve her high school diploma.
- In the early 1940s, Rosa went to register to vote in Alabama. It took her two years and three trips to the courthouse before she finally gained her voting card. She was subjected to racist clerks, unfair literacy tests (which only African American citizens had to take) and ordered to pay backdated poll-tax charges before she could cast her vote. But Rosa was undeterred and subsequently voted in every election in her lifetime.
- In 1943, a bus driver attempted to physically remove Rosa from a bus because she did not go through the back door, as black people were required to do. The white driver stood threateningly over her and told her to get off the bus. Though Rosa told him defiantly “you better not hit me”, she did get off.
- That same year, Rosa joined the Montgomery branch of the National Association for the Advancement of Colored People (NAACP), a civil rights organisation that was formed as an interracial endeavour to advance justice for African Americans. She later became branch secretary.
- As part of her work for the NAACP, Rosa investigated crimes and injustice against black people. She fought many cases in support of black women who had been victims of sexual violence. She was instrumental in the acquittal of Joan Little, who killed a white prison guard after a sexual assault and became the first woman in US history to successfully use self defence in a homicide case.

- On 1st December 1955, Rosa boarded a bus home after a day at work. The laws at the time meant that seats at the front of the bus were reserved for white passengers, and the seats at the back for black passengers. When the bus began to fill up, the driver – the very same white man who had ordered Rosa off his bus in 1943 – told the African American passengers to give up their seats. But this time, Rosa refused. She was arrested and fined for breaking segregation laws but refused to pay, arguing that the law was wrong.
- The black citizens of Montgomery came together and agreed to boycott the city’s buses in protest over Rosa’s arrest. Martin Luther King Jr. was elected as the leader of the
organisation that managed the boycott, and from 5th December 1955 (the day of Rosa’s trial) black people refused to board buses.
- Rosa was found guilty and fined $10, plus $4 in court costs. Her lawyers filed an appeal. Rosa and Raymond both lost their jobs shortly after.
- Rosa acted as a boycott leader, travelling across the country to speak about the boycott and coordinating carpools for black people who would usually rely on buses to get them around. She became known as the ‘mother of the civil rights movement’.
- The boycott meant that the city’s bus companies began to struggle financially, and it
sparked violent action from white citizens. But the black community stood firm and in
November 1956, after 381 days, the Supreme Court ruled that Alabama racial segregation laws were unconstitutional.

- Despite the victory, life in Montgomery was hard for Rosa and she faced death threats,
violence and was unable to find work. She and Raymond were living in poverty and decided to move to Detroit, Michigan in search of a fresh start.
- Despite ill health and unemployment, Rosa continued to be one of the most prominent
members of the civil rights organisation, supporting the NAACP, speaking at events and
fighting for those suffering discrimination and injustice.
- In 1964, Rosa volunteered to work on the congressional campaign of John Conyers. When he was elected to the U.S. House of Representatives, he hired her to help run constituent services in his Detroit office, where she worked until her retirement.
- In 1987 Rosa co-founded the Rosa and Raymond Parks Institute for Self Development to
provide career training and advocate for young people in Detroit.
- Rosa received numerous awards for her pivotal work for civil rights, including the
Presidential Medal of Freedom in 1996 and the Congressional Gold Medal in 1999.
- Rosa Parks died in 2005, aged 92.

Discover the GLØD blend inspired by this incredible woman: our Rosa scented soy wax candle is a bold and distinctive fusion of rosewood and rose geranium.